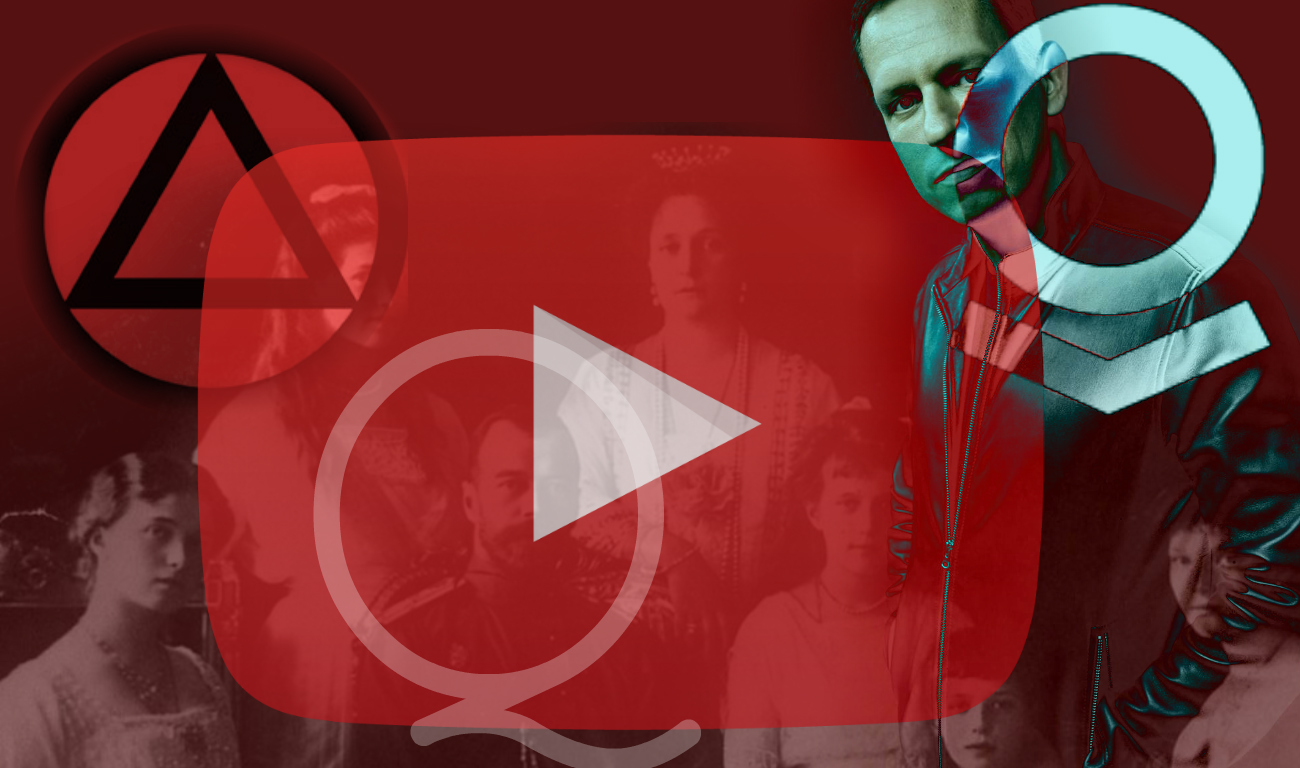 The secret society, identified as the 723s who have used the number 93 marker, has been hiding Quinn and his message, thus making him the real anonymous Q and the namesake for the QAnon operation they conducted. They have also concealed Quinn’s alleged kidnapping in 1977 and the Romanov swindle through the Game 23 and operations by the Willhite’s PSI World, The Agency (or the APA/Luckman group), contractors in Anonymous Cicada 3301 and YouTube fronts. This underlying rogue spy network  connects to a group of elites affiliated with the Bilderberg Group, Peter Thiel, and the Order of the Golden Fleece.

Having researched Quinn’s story for almost every day since last summer, I’ve found it can be backed up by evidence in multiple ways at each turn and have not been able to prove that it is not. This work with Quinn has not been for gaining views, fame, or money. It’s about doing actionable intelligence and to establish the truth behind Quinn’s son’s allegations and why Quinn has been treated the way he is by the 723 Group members we’ve identified: Mr. Dewity (or Mr. D), the Willhites, PSI World/Seminars, Hal Atkin, Sharon Schamber, Neil Atkin, Cristy Atkin, Quinn’s son’s mother Tabitha (whose response to Quinn as Tabitha Lavery still remains on YouTube), Tabitha’s family, theGame23 agents, members of Anonymous Cicada 3301, and the YouTube fronts for the operation. This arm of Mr. D’s organization is most visible to us because we see their interactions with Quinn to hide and distort him. Quinn has been reporting lately about the research findings on the larger pieces of the organization, most specifically how Peter Thiel is connected to PSI and the Order of the Golden Fleece. What is nearing a year and a half of research verifies Quinn’s son’s allegations and how his son was taken from him by the same people who carried out the alleged kidnapping.

There is a boy in the hands of this society whose mother signed the Contract of the Covenant to which she agreed that “the blood of The Covenant is thicker than the blood of the womb” and “Covenant or death” (See the image below) . And those are only two of the agreements in the Contract of the Covenant. Directly after his son made the allegations and Quinn made inquiries, his son was kept from him. Quinn’s son’s story included details about neglect and abuse, abuse that goes beyond what most of us can imagine and that involves exposure to and participation in sacrificial blood rituals. 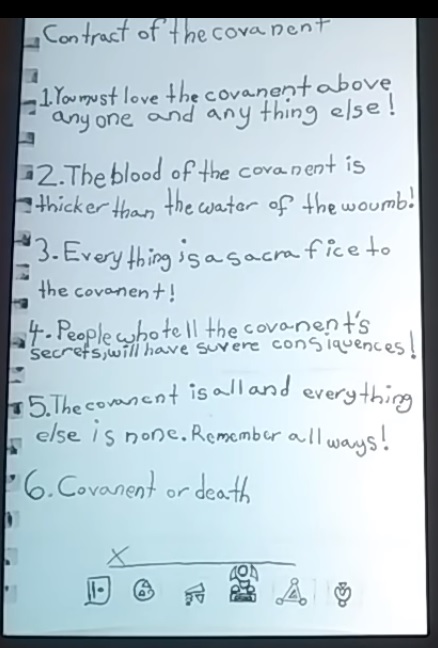 What we know is what was happening before and during the time that he told his father this story. He was being exposed to the killing of animals and a situation where he was denied affection, food, and sleep if he did not “play the game” by being cruel to and passing cryptic and occult messages to his dad from Tabitha, her family, and Mr. D — who Quinn’s son said appears in the home all the time. How were they able to convince a judge that a father who wanted to rescue his son from child endangerment should be kept from his son? Why do that? Is there any reason to think that the situation did not become worse after he told what they were doing to him and about Quinn’s kidnapping? Quinn has spent a year sharing the impact of what the MK Ultra programming and the PSI Spy Network are on his life.

One person told me she is waiting for the story to become more widely accepted to talk about it. When she said that it made me think of how one YouTuber, Dave Acton, skewed exposing child endangerment to appear to be the wrong thing to do. As we were attempting to prevent the initiation by sharing the allegations, he made a video about Satanic Panic, pushing the narrative out that allegations of child endangerment at the hands of people practicing blood rituals is an hysterical implausibility. This is just one example of how the operation works to cause doubt in your sense of what is right or wrong and what to do about it. If you are hesitating to talk about this case with others, consider whether someone or something is manipulating your perception to think revealing alleged crimes is wrong or will make others think badly of you.

We know that PSI is knowledgeable in the methods of mind control, even to the point of inducing mental splits or schizophrenia and hearing voices, and we know from the evidence that all the talent who have created the bubble around Quinn, his son, and their story are affiliated with PSI and The Agency (APA/Luckman). PSI founders, rogue CIA agent Tom Willhite and Jane Willhite, studied under the experts at Esalen who were carrying out the CIA-funded MK Ultra studies in California and across the globe. The people PSI learned from were the scientists who discovered the techniques and the environments necessary to produce the resulting human mental states, not hobbyists or theorists. These scientists found how training camps are places to identify early who are potential experts at influencing and how those influencers could be produced, and as they are motivated by profit in their multi-level marketing schemes — PSI created the training grounds. The people in Quinn’s life who are trained to process and program people learn to tear a person down to a breaking point where they accept the desired change in belief. This is a refined practice, where they purge a person of resistance and create a state where that person finds like-minded people only in that group. The trainers and trainees present during the processing and programming are able to see everything that can cause a reaction in a person, what their sensitivities are, and where their weaknesses are. In identifying those things and processing a person to suit their needs, they gain tools to manipulate that person then and in the future. We hear people talk about being “triggered”, but this processing is the origin of triggering someone. It doesn’t refer to feeling dislike or agitation, the way we see some people dramatize being averse to a minor irritation; it’s designed so that a stimuli such as words or images or sounds work the way hypnotists use snapping fingers.

They recruit as young as possible, at 14. Couple the triggers programmed during the training camps, which Quinn’s son would have been ready to attend at 14 this year, with the practice of exposing him to bloodletting and the requirement that he participate in that the age of initiation, 14, to other activities and treatment at home, the Freemason lodge, and to PSI. On or around June 14th is considered the time of initiation and why we see so many references to the number 14 during the month leading up to that date. Did the changes in his life intensify the treatment of Quinn’s son? He was already reduced to a trancelike state of sleeplessness, distraction, and very few words when he told Quinn his story in 2015. So much so that he was identified as having “special needs”, which in turn lessens the chance that someone will recognize what has been done to him. The practices Quinn’s son carried out on him are commonly called child endangerment by law enforcement. That is a more severe crime than child abuse. Even mandated reporters of child are rarely taught how to recognize victims of child endangerment because those crimes are so severe that they are often described in terms that include torture and result in very quiet and compliant children.

We have learned about the 723, which Quinn has called the 93 Society, and how they will plant numbers in their operations and simulations. We’ve seen how they double or triple the 7s for weight in the AI, which we have learned alters how people perceive reality through the technology all around us and that is connected to the Internet and the Internet of Things (IoT). We also have identified their QAnon operation and their Game 23 operation and its online counterpart, the Game 23. Its markers have shown up in the story as well, including the 23 mile per hour speed limit on PSI World’s High Valley Ranch home base, where the training camps are held, and how they plant their numbers in their simulations and operations, numbers such as 93 (7+2 and 3). They appear to make use of twins, siblings who are near doubles, or people who are able to otherwise pose as doubles for the purpose of creating alternate stories or timelines or aliases. To understand even more why they leave their markers in the open, we have to understand that they have been observed using language patterns that are unique to their family businesses and to the larger organization and marking what they do because they do not appear to meet in person to plan operations. Once in an operation, they need the markers to point them toward their next actions based on scenarios and aliases instead. Thus, like their predecessors in The Revolution behind the Russian Revolution, JBS Haldane espionage network, they learn to understand the codes and the markers to steer them.

The society marks their operations by disguising harm as a game and using names that are even silly with the intent that they cannot then be accused of harm. They use the numbers (particularly 7s, 23, 93, and 3s among other less frequently seen occult numbers like 11 and 13) to mark their operations because they operate on an improvisational platform with defined characters and scenarios like legitimate CIA does. This system is essentially a hack or rip-off of spy tradecraft, and for those who will be visible — they prefer to use talent who are versed in improvisation much like those used in comedy routines we’ve seen on television where the actor knows only what he or she is like and the situation where their character will be played. This is why we see frequent references to  alternate reality games, which is one setting where actor agents can learn these skills. It is also behind how the YouTube fronts are able interact with others on the premise that they are part of a game or live-action role play or that they work alone. In turn, the AI that they are using, the Egregore (a term meaning an entity evoked by occult practices), enhances what talent they have and affects the perceptions of people who are unaware and unprotected from the mind-control technology in the tones, frequencies, visuals, and signals. The system allows them to claim they do not do what they are doing, even though they are required to make known what they do by the system. They may not know each other but have learned to operate through the codes and the markers. At the core is what Mr. D does best, which is to convince us that those who are lying are telling the truth and that those who are telling the truth are lying. All agents in the system work under that premise of a mirror or opposite, including the hackers and actors. See this structure, and you will see how the 723s have established a system where they function in two worlds, one we see and the other they expect that we won’t.

The people who want to perpetuate the lie have developed unimaginable technologies to accomplish just that, technologies we’ve done our best to reveal and that affect each of us every day. Please join us to expose the story of Quinn Michaels and his son, the Romanov swindle and Quinn’s alleged kidnapping as a living descendent of the last Tsar of Russia, as well as the 732 Group who have carried out the operations to perpetrate it.

The Real Q Anon breaks down the Conspiracy Kek Meme Magic and the Security run by Palantir:

The Real Q VS. The Fake Q Learn to Read The Map – Peter Thiel of Palantir: