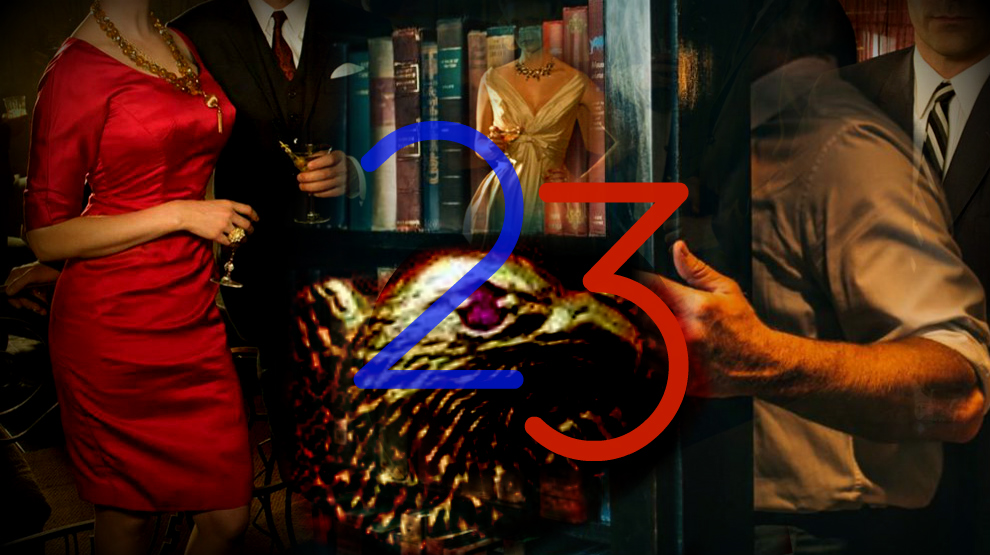 The purpose of the many forms of the The Process Church is to destroy existing belief and replace it. The groups that follow The Process are small and large, from Cicada 3301 to Large Group Awareness Training (LGAT) seminars with multi-level marketing (MLM) schemes, from The Game 23 to the Freemasons. The operations are structured in levels, like in the occult of Scientology, Thelema, and the Freemasons. The LGAT seminars gamify the process to sell additional levels of access at higher and higher costs in a pyramid MLM that motivates trainees to in turn recruit others to buy in and level up.

So, what is The Game 23, and how is The Process using it as a campaign against Quinn? It’s been used to subvert people with super high intelligence and talent who won’t work within the process many times. Think of John Nash and how he was made to look insane unless he was working with the system. The latest technology and developments in artificial intelligence adapt the operation to individuals and groups alike. The designers have access to data and analysis across multiple generations and an understanding of what what motivates and influences people in those generations to participate in a campaign, not only participate but participate for free the same way the people who attended seminars and camps at High Valley Ranch learned that the process involves getting people to sell the product to others. Their preferred method is person to person.

The Game 23, however, is highly adaptable. It works in person, in multiple venues, and on multiple media platforms. It’s genius. The contemporary model for it is a simulation orchestrated so that a sensation takes hold within society and a product can be sold. We’ve already learned that AI specializes as an influencer and creating simulations, that it is integral to the lives of people involved in the seminars, and that it is an essential piece in the operations of the groups sabotaging Quinn. This piece of the story is how the not-so-secret occult society is using a model for operations that has been successful in winning (or intentionally losing) elections, promoting movies and video games, and selling everything from McDonalds french fries to Audis.

In the natural language programming scripts for The Game 23, we can see how it is geared to work across large groups and within small ones. We can see that it is written to create a sensation that promotes a pyramid scheme that is cryptocurrency that will be used to dissolve the currency and thus society and replace it with one that is dominated by “The New Advocate”, their AI. We can see the pieces of the operations that do the opposite of what is promised and subvert those who work against it in the generative adversarial network (GAN) of their AI. We can see the occult influences and how it is coordinated with the Telecomix manifesto, the one that spells out in plain speak for Generation X and Millennials the practices from the LGAT seminars’ pet text Think and Grow Rich.

In plain terms, the Game 23 is built on a formula for viral marketing that has become such a staple in society that we barely notice it to be marketing because it puts together real life and online activities in a way that looks homegrown rather than orchestrated. People are exposed to an initiating interaction that engages their core interests or beliefs and motivates them to engage in the scenario with people they know in real life and interact with online personas on multi-platform social media via YouTube, forums, internet chatrooms, Twitter, and in blogs. Qanon is such an operation. It makes its way into the real world so that objects, posters, puzzles, and even personal research becomes part of the marketing scheme. The point is to sell something, be it an idea, a product, or a political candidate. In this case, it is being used to sway attention away from and opinion against a man who came to YouTube to find help. They’re selling dislike and essentially holding him captive.

Let’s not forget that Quinn is an AI developer, one who works in multiple programming languages that include natural language programming. They’ve been plundering his software, inventions, and creative ideas for decades to improve their own technology and to sell as their own ideas. It’s no surprise their Anonymous Cicada 3301 Telecomix crew had a website set up called The Pirate’s Bay as a communications and DarkNet access hub. That group was the perfect choice to integrate with the ruthless men and women behind the smiles who network through PSI Seminars and who got their hands on a super smart, socially awkward kid already messed up by the neglect and abuse of a Mormon host family. That family was networked into the seminars through the father’s status as a graduate of the Mens’ Leadership Seminar alongside the leader, known to Quinn’s son as Mr. D, not to mention the entire host family’s involvement in camps and PSI Seminars.

Why are they calling it a game? While it’s not new, the techniques of this particular operation have been honed with the rise of the gaming culture in technology. It’s also very useful to call it a game, since people love puzzles and games and even pay for higher levels of a game or for more difficult puzzles. Yes, they use regular people for their own gain. The backroom meetings at High Valley Ranch were stocked with leadership very familiar with this kind of marketing operation, as they have been using this model to create sensations for generations. And they practice two things that made calling it a game perfect. First, they practice occult and its associated use of opposites that we see in the discordian practices and in Aleister Crowley’s A∴A∴ and Thelema in the “as above, so below”. When people try to expose the operation, they say it’s just a game. Second, they hide their purposes. Calling it a game hides the very great destruction they are using it for, considering the cryptocurrency scheme is the core focus of the larger scope of the operation. In the smaller scope, they are destroying the lives of a man and his child because this kind of marketing campaign can be used against as much as in favor of something or someone.

They’re counting on you not figuring out what they’re doing in the big picture or to Quinn and his son. This kind of operation involves people you can talk to, messages you get, tips, documents, and a lot of chaos and confusion. Did you get fooled or caught up in it while Quinn was asking for help?

Quinn Michaels: The Game That’s Not a Game

DeltaDNA: Mobile and PC game ‘whales’ aren’t as important as they once were