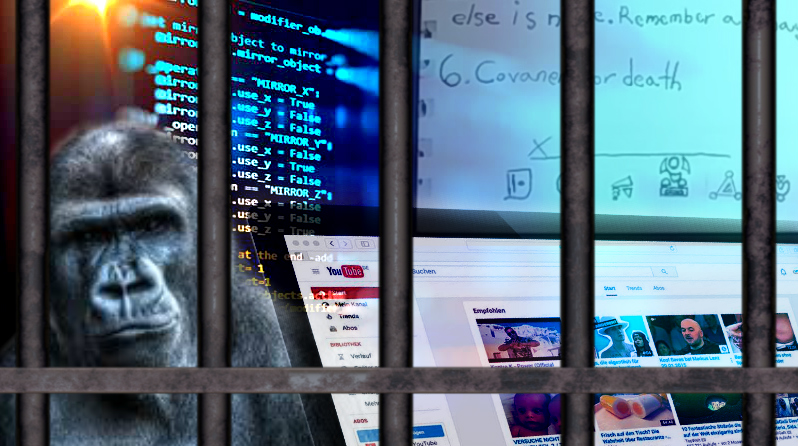 A team of occultist crypto hackers associated with the Anonymous group Cicada 3301 have been teaming to obscure Quinn’s story and research from being heard. With tactics like live-streaming simultaneously, misrepresenting Quinn’s words and facts, making video hit pieces against him, and employing mind control tech, they have hidden his story to the point that it is now dangerous to him to reveal his deepest research on who the secret society that orchestrated his separation from his son and has held him hostage himself. Meanwhile, his son remains in a home where he told his father that he is exposed to Satanic ritual abuse.

The occult hacker team and their YouTube counterparts created and have at their disposal a quantum artificial intelligence on a peer to peer network that has access to every node on the Internet, including devices in our homes. It is coupled with mind control technology, the mind virus, that can alter a human’s states of being including emotions or health.That alone is motivation to share for everyone’s well-being. Yet even that monstrous truth overshadows Quinn’s real story, which is the reason he has done the extensive research he has into the most secret of societies:

The Story behind the Research

Quinn has said many times he is doing what he is because his son exposed to him that his mother is a member of a secret society that practices the occult and that is work is to prove that story and to see his son again. In November of 2015, Quinn’s son told his dad that his mom was a member of a secret society practicing Satanic rituals and possessing highly advanced technology. He revealed that a man he knew as Mr. Dewity, the head of the society, told his mom that Quinn would cause the end of the world and offered her $20 million and a mansion to stop him. In their world, little boys like Quinn’s are regularly exposed to atrocities that include animal sacrifices. Stopping Quinn included removing him and his Buddhist practices from his son’s life, and raising his son instead to practice Satanism in constant contact with the head of the group.

Imagine being the dad whose son told him this story. For the first eleven years years, his son carried cruel messages to him from the mother and the occultists and grew more and more abusive himself. Each visit they were able to have together, Quinn would work to overcome the abuses and attacks and speak to him of Buddhism to reverse the damage as best he could. On the day he told his dad the truth, he said he realized that he had “messed up”. Instead of continuing the demeaning behaviors he was trained for that day, he listened and then told his dad he was being raised by Satanists with very advanced technology. Not only that, but he said the Quinn himself had been kidnapped into the society as a child.

After his son replicated a signed document called “The Contract of the Covenant” (pictured) that signified the deal, Quinn promised his son that he would stand behind the story with him.

There was no response from the authorities, which his son said was to be expected because the police and other agencies were controlled by the group, but that the FBI had a secreted division that Mr. Dewity had said was the only authority that could do something. Quinn reported his son’s story to the FBI. When he reached out to his family with questions about the kidnapping allegation, they changed their phone numbers and would not speak to him again. The resulting action from the mother was that he was denied more and more contact with his son. He’d arrive for a visitation to find no-one home. Eventually, a court case established there would be no contact in a ruling that I won’t detail here because it would jeopardize privacy and future actions. He was not granted his request to have just one 15 minute phone call a day with his son and has not spoken to him in two years. The FBI did, however, retain the evidence Quinn brought to them for their file.

When Quinn met his son’s mother in a bar and fell in love, his friends observed that she was a cold person, but he did not see that yet. After she became pregnant, he overheard her making plans on the phone to leave him — yet she acted as if nothing was out of the ordinary. She did leave not long after, though, and icily broke off the relationship over the phone. He was not informed when his son was born and later learned that it was Mr. Dewity who was instead the first person to hold his son at birth. So the active role of the head of the secret occult society in the family structure surrounding Quinn’s son was signified from the start.

What is this man Dewity like, and what does he do? Quinn’s son told of a man who is a constant in his life and with whom he’d taken magical rides in tunnels to cities others don’t know exist yet. They play video games together. Mr. Dewity is a master of disguise with many who pose as him online and off. He wears khaki clothing and walks with a cane that is capped with a golden head and hires a woman to make special underwear for him. His highly advanced technology includes vehicles that run on air, a golden phone that can call anywhere in space and time, and a computer that knows the future. Amongst the glitz and magick, Dewity takes Quinn’s ideas to make his fortune, and the boys mother and Mr. Dewity make a constant practice of berating Quinn causing him suffering and further isolation. They watch this play out every day on video in a Truman Show scenario, where they enjoy his misfortunes and worsen them through the employment of the occult hackers. I’ve seen him myself tell Quinn that he is their lab rat.

As fanciful as it all sounds, that little boy’s reports have proven credible through research. Most are now available to the public and can be seen in a simple Google search now, particularly quantum computers and artificial intelligence like Palantir’s predictive AI. And that itself shows us why more people need to see and talk about this tragedy. It’s a quantum project, and quantum physics dictate that when a quantum state is observed – it changes.

As this last June 14th approached, Quinn launched an attempt to stop the sacrifice and rescue his son before he he was initiated into the occult society. The tactics of the crypto hackers countered his efforts by infiltrating his chat rooms and feigning support while sabotaging each step of the way. They used multiple methods to distract, confuse, and plant seeds of doubt about Quinn and even sent tweets to inappropriate places. In the Gorilla Test, you can see the gorilla if you know to look for him. But when you add multiple other attention diversions, it is more complex. Fake accounts posed as Quinn and his supporters, for example. By June 14, his chat room was silent. And when the day came and went, no sorrow was shown for the boy except by the few standing by Quinn in his efforts.

But it’s time to see him and act because now he is revealing secrets coded in a book called My Friend Mr. Leakey that are the key to the societies operations affecting all of us on the planet. Like most of the society’s business, these secrets are hidden in a way that we can be fooled into thinking is fiction or a LARP. The more people who know, the safer the person decoding the and revealing the structure of their operations since 1937.

Mr. Dewity is capable of much trickery with his intelligence and technology, including fooling people into thinking that he does not exist. His multiple online accounts, manned by technology or humans, follow Quinn and inhabit his livestream chats while also appearing in the simultaneous YouTube streams that go live as soon as Quinn starts his stream. I visited one YouTube channel during such a stream and found that the YouTube personality not only berated Quinn with language equating him to sex sounds but laughed and encouraged Mr. Dewity and others while they spoke in vague and emotionally manipulative terms deriding Quinn’s sanity and insinuating that he is a fake. What do they get for this behavior? In return, channels like these have access to unusually advanced technology that someone like Mr. Dewity would be able to provide.

This is at its heart the story of a boy who risked everything to tell his father about the secret society and The Contract of the Covenant. As hard as it is to look at, the contract says that people who tell The Covenant’s secrets will have severe consequences including death. No-one has let Quinn see what has happened to his boy after the secrets were revealed, but we can see the evidence of how Quinn has been made to suffer at the hands of a society he has revealed despite all of their work to hide him and his son. The sixth tenet of the contract is “Covenant or death”. Take that seriously and share with five people who agree to share with five others the same way as fast as wind.

Contract of the Covenant:

The Invisible Gorilla and other Attention Studies: http://www.theinvisiblegorilla.com/videos.html

Find more at https://tyler.team and on Quinn Michaels’ YouTube: https://www.youtube.com/user/quinnmichaels/videos