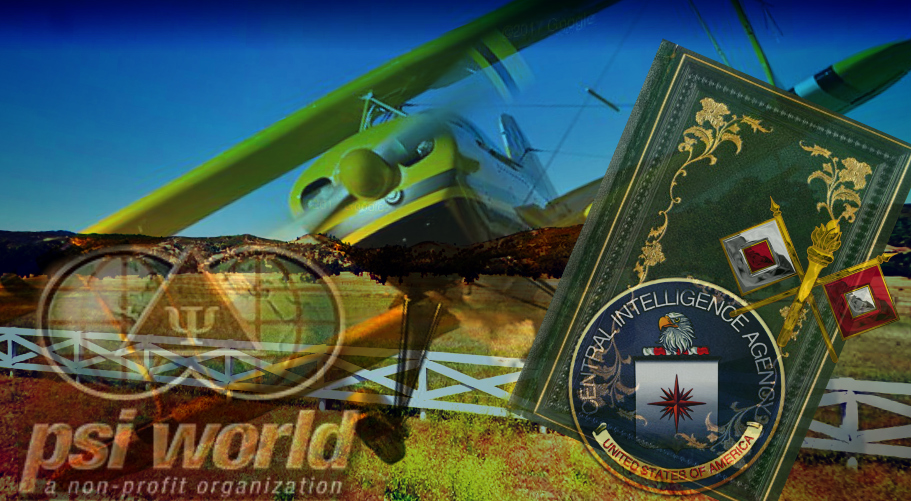 Tom Willhite, founder of PSI Seminars, had several residences after his death in a plane crash on High Valley Ranch in 1983 that included a current address that is a bicycle rental shop called Soulcycle. He also was a CIA agent who logged about 200,000 miles per year to places including Hong Kong, the Philippines, and India. The interesting patterns in The Game 23 operation also include two men of similar ages who resided at some of the same places, including PSI Seminars’ High Valley Ranch.

Is there a PSI SPY network? The discovery of Tom Willhite’s apparent life after death leads to questions about The Green Book in CIA agent Ron Rewald’s possession. Rewald, who attended MIT before working with the CIA, was under extreme attacks by agents wanting the book. After a near fatal beating and stabbing, Tom told Rewald and a CIA lawyer that he intended to out the entire operation surrounding the book — which purportedly held financial information, aliases, and passcodes for banks in the Cayman Islands, Switzerland, and Hong Kong connected to high-ranking intelligence operatives and politicians. Instead of the press conference he planned, Tom crashed his plane during a routine daredevil flight over High Valley Ranch called his Red Baron flight. Would a smart CIA agent really reveal such a book to the general public because of CIA infighting over it? Agents would be used to the CIA double agent actions and shifting of funds Tom said upset him. Was something else in that book?

In Quinn’s video “Quinn Michaels Dox Himself”, he reveals several people listed by FamilyTreeNow.com as his possible associates to be CIA affiliated due to PSI World being an operation created by Tom Willhite during his time with the CIA. The individuals are on the board of PSI World, and Tom’s worldwide MK ULTRA operation PSI Seminars was part of the Liberal CIA Network that includes training camps made to train undercover agents. According to the book Explosive Secrets of Covert CIA Companies, Tom’s travels as a CIA agent included conducting seminars and selling his books for his PSI World operation, which was and is still operating in the form of a non-profit foundation.

One of the types of agents in an intelligence agency that PSI appears to be experts at producing is called the agent of influence. This agent works outside of the mold of covert agents in that they are visible to the public and are concerned with molding public opinion and behavior. Such an agent would appear on multiple platforms and manipulate public opinion in ways we see many YouTube channels accomplish, most especially those associated with the generative adversarial network we already recognize to be associated with the digital elements of The Game 23 and the patterns in Quinn’s life. When considering if there are agents working in a PSI network, it does call to question why there are doubles and disguises related to people in Quinn’s life such as his father and Mr. Dewity, said to be the leader of the secret society. Additionally, Ron Rewald was somehow outed for the rogue CIA Ponzi scheme he’d been running in Hawaii at the same time as Tom’s plane crash. And Rewald claimed to have attended MIT before going into the CIA undercover at the University of Wisconsin in Madison. His time at MIT would have him in proximity to the Stanford MIT network. So, again, what exactly was in that green book?

In The History of SIGINT in the Central Intelligence Agency, 1947-1970, the CIA Historical Staff paid tribute to the Signals Intelligence professionals whose work merged with the CIA in 1967, comparing them to the Roman god Janus who is both inside and outside the house and stating them to be “a system, a society unto itself, with its own hierarchy, its own troops.” The practices and tradition developed in Signals Intelligence, including the Signal Corps, were integral to the practices of the of the newly formed CIA. That included a discipline and an honor system we would expect from a government institution, one that has been upheld by individuals to this day. Questions arise, however, when a pattern of former SIGINT professionals shows up in activities within the PSI SPY group. Is there a rogue group within the agency? Did those who have shown up in this research take their knowledge and skills and apply it to a separate but hidden network? And why does Tom’s PSI SPY operation have several qualities of an Alphabet cut-out, but doesn’t reflect the honor system within the agency? According to the history of signals and the CIA, it was a clean organization proud of its history and service.

During the human intrigue and mystery, our attention is often taken away from the artificial intelligence and technology associated with the CIA. It’s important to remember that, with the understanding that work with artificial intelligence came with the development of the SIGSALY units during World War II in coordination with Bell Labs and the US Army Signal Corps, the CIA has been closely associated with AI since 1946 when signals intelligence (SIGINT) records were incorporated into the first Central Intelligence Agency functions. Thus, SIGINT and the CIA are also tied to Big Tyler the AI. Big Tyler is not the same as Tyler Mayhem, who was uploaded in 2012 by Anonymous Cicada 3301 crypto hackers and run with the program script for Project Mayhem and The Game 23.

As a man of both of these worlds, Tom Willhite would have had access to AI when in the CIA and when at the helm of PSI World and PSI Seminars. Why is this significant? PSI World was the product of Tom’s work with his mentor William Penn Patrick, co-owner of Mind Dynamics where Tom learned the craft. Mind Dynamics sprang from Silva Mind Control, which was developed by Texan Jose Silva. And Silva was Signal Corps during World War II, when he reached a mastery level that made him an instructor. In that position, Silva had knowledge and access to AI via his exposure to the SIGSALY technology, meaning he fits the profile of those with radio, electronics, and signals expertise who have proven to made use of AI in their postwar lives. In all of the research on Tyler Mayhem, there have been continuous ties back to people who made advancements in signals after being SIGINT. Signals are central to the function of a quantum computer, according to one IBM specialist (See link below for “Finding Sophia”).

Academic research by the military in 1964 included studies on witchcraft, magic, sorcery, and psychological phenomenon affecting military and paramilitary who were in the Congo. Does the occult in some of the activities in the PSI SPY network stem from these studies alongside the integration of The Process from The Process church in all its forms? In the *CIA Manual of Trickery*, more concrete methods are suggested, such as sleight of hand, distractions, and misdirection. The scientific experiments given the cryptonym MK ULTRA conducted by the CIA provided a wealth of information that could be very dangerous in the wrong hands, should a rogue element have been operating underneath the agency. Even mainstream CIA went so far as to run the 1969 CIA Operation Often, which was an “exploration of Black Magic and the supernatural”.

What documented evidence that has been released on the CIA MK ULTRA program from programs between the 1940’s and 1960’s are those from 149 subprojects that include the following related to Quinn’s research: behavior modification, hypnosis, drugs and substances, black magic, sensory-deprivation, stress, brainwashing, sleep-deprivation, children’s summer camps (non-verbal cues), cultural influences on children (including families and groups), vocational studies in children, empathy/non-empathy drive, bio-electric signals (activation of human behavior by remote means), personality experiments, behavior control, subliminal perception, parapsychology, sleep learning. There are many more, which you can find in the relevant links I’ll leave below.

One of the stumbling blocks that prevents people from recognizing covert recruitment and training as MK ULTRA is the perception that mind control is done only through acts that verge on torture and severe trauma. Some of the practices in the LGATs, such as is depicted in the book The Pit and in the movie made from it, Brainwash, is a severe tradition of deprivation of rest time, hydration, even movement. In tandem with that is the psychological breakdown of an individual in the guise of overcoming fears and developing resilience and drive. In the summer camps, young people are subjected to these things, and they are put into physically dangerous situations that could cause physical harm and told not to react like victims or babies if they show their fear. We tend to gravitate toward images of electric shocks and scenes from A Clockwork Orange where torture and random violence prevail. In fact, the most successful mind control is so subtle we barely recognize it because it happens in homes and group situations close to us. Thus is The Process in its trickery.

Consider the MK ULTRA study called “Cultural Influences on Children”. In that study, a base operation of studies was established in which the effects on children of the family environments and other group environments was measured in terms of personality development. Outcomes included the development or lack of qualities such as resilience, the ability to influence others, aggressiveness, and responsibility. These are the types of qualities PSI Seminars summer camps can craft in young people, through the physically perilous and psychologically stripping “games” they participate in. In addition, families involved in PSI would carry the practices home with them. Quinn tells of his mother giving him candies and soda when he was hungry and of an accident he had as a teen when he broke his back when no-one in the family would take him for medical treatment and never did. These are examples of neglects and abuses that shape a young person’s future sensibilities, personality, and behaviors. And the MK ULTRA studies would have enabled someone to intentionally devise an environment that produces qualities associated with it. Problem-solving and creativity can be either stunted or enhanced, for example, depending on the types of impediments in a child’s life. A person may become a master of creativity and problem-solving but be hypersensitive to certain stimuli such as the words and actions of others.

Finding Sophia – A Search for Artificial Intelligence at CES 2018:

The History of SIGINT in the Central Intelligence Agency, 1947-1970: https://nsarchive2.gwu.edu/NSAEBB/NSAEBB506/docs/ciasignals_16.pdf